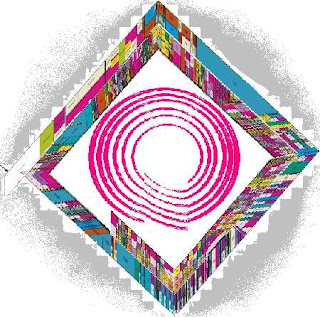 Hello, while thinking of what to do I spent an idle moment selecting-highlighting this blog's title area, a common past-time. (but how idle was I really? -I'm still here) upon sudden deselection (blue-to-white flash) the white appeared defocused and beige. a repeat performance didn't dissappoint, and moreover, the new appearence persists in uniform expanses and the periphery, these two conditions summing their effects where they overlap still.

where can I see this phenomenon regarded as basic? where eye-axioms teach me me, please.

instead, searching for this post's title's enquoted fragment yeilds irrelevant descriptions of hexadecimal encoding. we asked for basic, and see anything but. math and codes surely also reflect something central about being a person, and even perhaps having an eye, but aren't body music, which is all I want to come on the radio

speaking of which, getting tired of waiting, I propose a reorganization of the electromagnetic transmissions bandwidth (pictured above, sort of): over the current commercial AM/FM bands, pack looped songs, having a known bandwidth for each transmission. Pack, not space - get it? "Song" should be held to perceptual and not linguistic or commercial standards to mean a recognizable time/pressure patterning: sing along! (here we enter into eveidence the idea of interlocking/multiple grooves on uncertainty records, also pictured above, centrally. different particulars, same record) the definition should, as it does now, melt to fill the voids the transimission system leaves it. and then set and hold a shape to work out other problems with; go on!

and as an side-note, I note: if we fix the definition of song, it automatically drags the idea of "looped" along with it to a nice new home, or halfway house at least. given enough time it probably gets the definiton of "pack" a bit soggy too, which is the best yet hoped for today
Posted by yasi chrissy carellel pretty perera at 8/18/2008 10:29:00 AM No comments:
Newer Posts Older Posts Home
Subscribe to: Posts (Atom)