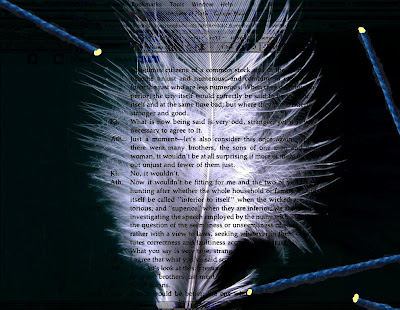 Do you air-reed squeal outs on bottles like I do?
Francis Holland first showed me this years ago, then as now being I think more familiar with bottles than I. Perhaps from his wet hand descriptions I maintain an image with my squeals of a licked Egyptian eye (he'd told me it's the way a Ney sings, and somehow, I'd seen, or had pantomimed to me a harelipped ?hare-palate, wet sound Egyptian, with bore entirely in his mouth) in geometrical reduction. (truly geometric; that is, platonic, down to the shine)

not yet done enough to form conclusions, but yes to see it may be possible. /directions on the endless bed.
Memory of sitting forward squeal a beer bottle after a firepit meal in Don Buchla's yard, Don mesmerized by fire and sound as I and afterwards telling me hm yeah the four pitches that I had not numbered at all. remember the sliding they had with head tilt, beer still left in the bottle, and more recently walking, and the ?Orangina small orbiting registers

>Pamphlets on Games
Remembered Jeremy Taylor's Basic Hints For Dream Work recommends a "return to the same physical position you were in when you first awoke" when telling friend this morning we should have an unfinite bed and each sleep time not restart from slated parallel positions, but carry on from where we left off. Maybe then we'd get some place

At least we can still search the GoogleAnswers archive, which is all I ever did anyways, being more basically in need of questions than answers. One special request I remember, but have now misplaced, was for the name of the standard work on Chinese history. This called out a pretty snake-full of ideas on standard works generally, which I can't decide slithered only through my private imaginings or in public view.

I'd like a list of standard works.
[a library purchasing list, MAA basic library list "BLL***"]
(I like photos of bookshelves too, leading me to reject every DVR I've tried, and many video monitors. To inspect the pause behaviors of many video contraptions, and design my own several mornings on paper. Stockhausen's Beethoven-hold (SSJaeger's FFT-based spectral hold; Eltro Information Rate Changer; rotary playback head, still tape; Don't answer first, demand first: European (as oppposed to American) tape music))

Pólya György's How To Solve It
Nice to see the difference between what you can ask a person from time to time
we are all moving together (an unreality of other times; piled Type-C prints 4x6 (aspect ratios etc))
backup treats! try threadview?id=254598
Posted by yasi chrissy carellel pretty perera at 7/09/2010 12:52:00 PM No comments:
Newer Posts Older Posts Home
Subscribe to: Posts (Atom)