I have a possibly related private problem: when running I seem to have 'gears', and I can't always get to the one I want, and can't even tell what another gear would be like, but just that there's some other way I could be doing things that's not fully accessible to me.

could we have sports where the objective isn't to move oneself fastest through space, but just to move oneself the fastest? Body music! Brings to mind an old discussion with the aforementioned Saunier: the fastest drummer -- not the most impulses per unit time, but the most sudden impulse. the drummer who doesn't need drums, but rather plays sonic booms by breaking the speed of sound at each stroke. Whips!
Posted by yasi chrissy carellel pretty perera at 8/23/2008 10:38:00 AM No comments: 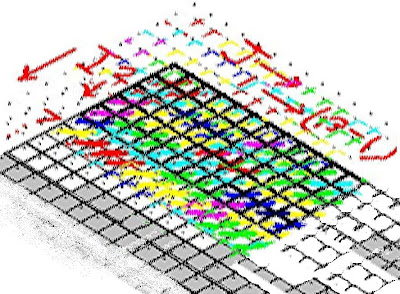 here's a picture I drew this morning just now while trying to understand loop skewing from a really obscure description. So obscure it's not even really a description, but an example that's supposed to be exactly irregular enough to exemplify every contingency that might arise in the skewing of an everyday 2d array. teaching problems have to have this quality in a way, but it's funny if you try putting everything to be taught into exactly one problem. so funny that I thought I'd like to learn loop skewing that way- seems a certain kind of efficient. But, I haven't understood it yet so the drawing is of the pre-skew traversal of the array in a usual way, showing dependencies of later assignments on prior ones. Then I got a bit frustrated and crumpled up my drawing. hopefully I'll be posting a not frustrated drawing soon-- maybe after pancakes
Posted by yasi chrissy carellel pretty perera at 8/23/2008 09:32:00 AM No comments:
Newer Posts Older Posts Home
Subscribe to: Posts (Atom)