William Sabiston kindly took me to John Hawk's class a few weeks ago, where he read the synopses off the backs of a couple PBS astronomy VHS cassettes so we could all pick which one to watch. One mentioned Dark Energy, which Hawk was understandably dismissive of, and John Dobson, who's mention prompted a little story about attending one of his telescope building classes at a Berkeley Vedanta temple. He did not mention Dobson's own Dark-Matter-and-Energy-free cosmology, which supposes that as particles approach the edge of the universe, our prediction of their velocity tends towards certainty, that by the uncertainty principal their positions become radically uncertain, allowing them to be no longer at the edge, but anywhere within the universe. [starts avoid identification] 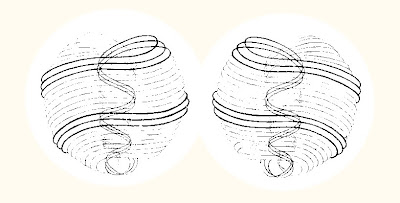 William mentioned had just come back from Mt Tam and Hawk said something about the last time he'd been there. Talking about looking down from there, a small conflict of spatial models revealed. Hawk naturally orienting himself to absolute directions even inside the video lab with no windows and a convoluted entrance hall, to answer the question. I, and it seemed to me William, following but at a distance of calculation on conjecture, imagining the turns walking out of the building and then looking around. [were we the only three there to have been up Mt Tam?]

and again, during a recap of last class talk about which direction the earth turns, Hawk looked up and around, oriented himself and his pointing firger to what I assume to be north, and only then with his other hand described the motion of the surface about the pointing finger. William and I , along with a few others did the same with our hands, but I don't recall who oriented themselves in the same way. Reminds of some experiments on gender correlated preference for absolute vs relative spatial orientation played out in the windowless basement of Tolman Hall. Back then I heard men use absolute navigation and women relative; it was in the newspaper
psychology.berkeley.edu/resources/EvacDiagrams.pdf
(anechoic chamber pending dismantlement in B50F I think)

[and what was the difference between those that copied Hawk's hands and those that didn't? reminds of a class of Andrea diSessa where he described a public trasportation system consisting of a 100 mile high wheel rolling along very quickly (like a revolution in 3 minutes or something), with seats all along the edge. Asking us to imagine that as the wheel passed us waiting on the platform, the instantaneous zero velocity when our seat touched down cycloid style, getting on, and having a chance to get off every 100π miles (Berkeley to CalArts in 3 hair raising minutes! I am not making this up!-- at the time I didn't know what was a little over 314 miles away or any other information of that type which I now do and question.).. all classmates had private imaginings and then we tried talking about it which was as usual in that class totally disappointing. finally, to seal our fate a kid next to me said something like "it's completely out of our experience to be on a giant spinning object so big we can't detect the curve of it [I had already read Borges by then and thought of him] and spinning so astoundingly fast." I almost laughed out loud that this same person would glibly be able to recite that same with opposite meaning if asked about the earth's motions that second. as it was I said nothing and nothing happened, and I think nothing would have happened even if I had said something.]

This isn't actually of the series we watched but something I think about from time to time:
pbs.org/deepspace/broadcast/animator.html

[ and was the Gallant Lab in Tolman too?
I never saw any rough shit, but I know now.
FUCK THAT SHIT
negotiationisover.com

my ex- and very favorite neighbor Robert Eschellmann (?sp) used to do some of that work. and laughed about it disgustingly, but also I think disgustedly. I never knew why he quit, but I thought so. He who turned me on to Solzhenitsyn (and so much else) ought to have known right?]