By the way, I've been thinking of roman numerals for the last year thanks to Shannon's THROBAC, so seeing last post's "Ctrl+C-Ctrl+V" made me think of Ctrl+C+(-ctrI)+V. [and thinking so made me tidy towards it, too] Elements out of strictly descending order having their signs reversed by roman convention we can make it just nice looking CCIV. 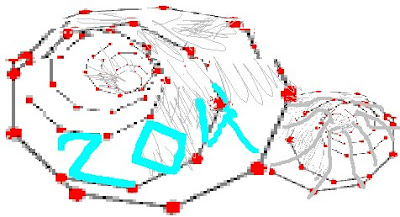 Speaking of coming in pairs of threes: I recently read, I think in Sayers' somewhere, "square paned," and have found it since in others'. 'Recently' meaning sometime since I've had Euclid's algorithm steadily on my mind, so the windows naturally made me think of its proof of the window's commensurable dimensions. I wondered then about panes of other proportions: 'golden-paned', for example was the example I found for my marginal note prompting future wonder.

That future came today when tatami mats suggested themselves as members, immediately followed by bricks, which I had just a little less recently thought of as adjuncts to a then-separate look at cultured stone. Bricks kept their place as adjuncts for today while I defocused on tatami mats --the most promising and elusive of the partial finds: a paper entitled "the forty-one steps," yet to be located in full

square-paned is to GCD as golden-paned is to Greatest Golden-Tile as bricks [header-, stretcher-, english-, garden wall-, flemish-, quarter-, herringbone-, basket-, american-, rat-trap- Bonds] are to [H-, S-... (-CD)s] as tatami-covered is to Greatest Tatami Mat Tile.
Along this sentence we are asking not only for the largest tiles possible, but first for the decomposition to be made in irrationally proportioned units, and then their arrangement to follow some special rules I've had trouble locating. Hopefully the forty one steps will tell all.

The least vague source I've found so far has been a Alt+PrtScr-Ctrl+V google books' limited preview of Heino Engel's "Measure and Construction of the Japanese House", most repeating one another to say only that "mats must not be laid in a grid pattern, and in any layout there is never a point where the corners of three or four mats touch" while implying that there's much more to be found out somewhere, and perhaps Ctrl+C-Ctrl+V'ing wikipedia's Image:Tatami_layout_1 that one might have drawn in the same time.