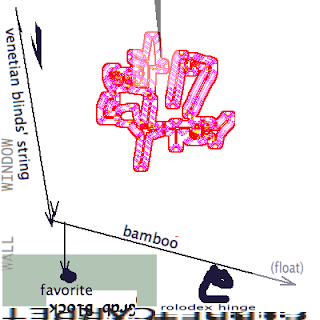 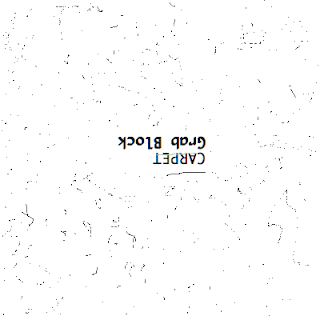 Yesterday unfiled the left-over postcards Will Sherwin made and self-addressed for me, to get me to write him while he was up in Tasajara for his last long stay. Some had a few lines I don't remember writing, one that struck me: A PERSON THINKS THEY ARE GOOD. MAYBE THEY WILL HAVE A DREAM WHERE THEIR ACTIONS, PERFORMED ON THE CLOSE SIDE OF THE LINE DIVIDING GOOD AND BAD, ARE MOCKINGLY ANALOGIZED BACK TO THEM BY ACTIONS THEY WOULD PLACE AS EVIL. (5/23/04) on most of the postcards Will had cut out things from magazines and pasted them on the picture side, or done drawings etc. This one has a pale deep sea creature with a big gaping toothy mouth, an unhinged jaw. I wonder if he did this on purpose in relation to his dreams of evil snakes. and once an arctic snake, white fur aquatic killer. and did I choose to write that particular thing on that particular card? I don't think I had so fine control in those days

Then last night, visited Lyal's housewarming party. and practically first thing as I got there he asks me about banshee kitty and if I think leaving her locked in her room for the party was a good idea, instead of having her freaked out by all the new people. I said yeah
later I went in to visit her and found a mess of stoners in a cloud of smoke. banshee sitting in a basket in the closet. played with her a bit and tried to connect with her deep calm (all speeds).. concerned about her situation, not wanting her consciousness altered against her will and ability to refuse or control. I asked celebrants and finally Lyal. everyone had a different take on it, but all unwilling or unable to enter into the depth of true possibility
I HAD TO LEAVE
LYAL MAYBE YOU WILL HAVE A DREAM
I love you

I muttered 'lycanthropic human' on the way to the car,  and thought yes a monster is better to be or to emulate. lights out
Posted by yasi chrissy carellel pretty perera at 10/17/2010 11:44:00 AM 3 comments:
Newer Posts Older Posts Home
Subscribe to: Posts (Atom)