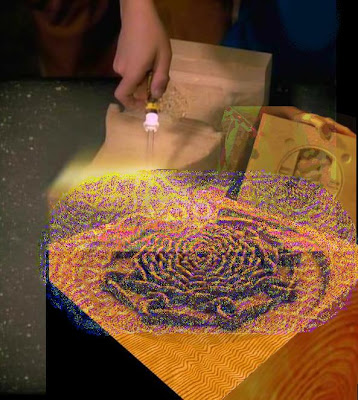 Friend Max Seeger wrote in to report that riding by Spaghetti Charlie's on his nice bike he found it looking very closed. Then we started to discuss bike geometries, fork rake especially- as it's an old favorite discussion topic of ours (we once built a while-riding-adjustable-geometry BMX bike together and one of the Cosovo-Albanians even helped drive some nails into a being-built-at- the-same time trike. I knew they weren't Armenians. The trike and BMX had a parts donor bike in common)
I imagined again a haptic feedback system supporting me in five places (hands feet and crotch), responding like a bike, but adjustable as to specifics, taking adjustment from some small virtual controls at some of the five points (Twiddlers and combined brake/shift levers always remind me of one another) in various degrees of independence from the mechanics of staying afloat.
The imagination is like the holodeck with 'programs' we return to, perhaps refining them.
[what it means, the moment Lt Reginald Barclay deletes his holodeck programs. I watch him blended with Michael's Jugend]
I posit a program- all black ( nearly. that is, to explore varieties of indistinctness, darkness without form/ gravitation), describing the 5 supports.
Posted by yasi chrissy carellel pretty perera at 5/29/2010 01:02:00 PM 1 comment:
Newer Posts Older Posts Home
Subscribe to: Posts (Atom)