also yesterday, in discussing with Will, we came to the question of how to transform a world with many people into a world with few people. much material for future work (novels, buildings). In digression I asked if he could imagine that right now we were living in a world where everyone was homosexual. We went to that world and I asked how it was different. He described solidarity and openness (feelings also mentioned earlier in an analogy to the sinking Titanic wherein there are rooms where people do something completely different- the internet is sinking! web-rooms)
Will say "another one like you, but better" I note indicates an enemy in the heterosexual world, but a friend in the homosexual. the next step in the derivation is to imagine just that functional replacement by its consequences.
Posted by yasi chrissy carellel pretty perera at 4/09/2011 09:57:00 AM No comments: 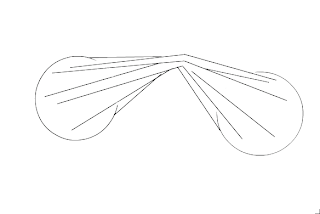 I think there's going to be alot of these! not quite right, first try. lines are not touching in imagined version. a bit sparser, more dynamic, more elastic.
imagined yesterday while talking to will about mappings from one part of oneself onto another. earlier in the day he'd asked if mathematical ideas had effected how I am in the world. was saying we acknowledge that the connection between out thoughts and other parts of us could be entirely different than we imagine, yet we seem to persist in acting as if we knew- after band practice where in dropping a goal we fulfilled it. "oh. I see. I have to occupy your mind". unrelatedness of thoughts to results. last week phone description of parametric function passing through fixed points analogous to what happens on a certain analysis (in this case, whether we sound good). varying the parameter changes everything BUT those fixed points (in this case, our speech and feeling about whether we sound good).
Posted by yasi chrissy carellel pretty perera at 4/09/2011 08:44:00 AM No comments:
Newer Posts Older Posts Home
Subscribe to: Posts (Atom)